I fell into a bit of a lull there for awhile folks. My apologies. But after the 3 concerts in 3 months stretch of 2011, we experienced a dry spell. Not only were there very few funds to purchase anymore concert tickets, but no one came to town worth seeing.

I was really disappointed in Avenged Sevenfold. It took me awhile to get past that. The Bug, however, had a great time. I mean, what 15 year old on the floor, in the pit at an A7X concert wouldn't be having the time of their life.  I was already stressed out.  But when M. Shadows screamed at the crowd that this was the last song and he wanted to see the entire floor turn into one giant mosh pit....all I could do was glare up at him and scream, "Really? Dear God is that friggin' necessary!???"  Then I blinked and the concert was over. No joke.

After a brutally hot summer of 2011 and absolutely zero concerts, I was given four tickets to Stone Temple Pilots at the Austin City Limits Moody Theatre!  These came from a friend who is a generous donor to ACL and in return, is given season tickets.  She is not a fan of STP and so I was the lucky recipient!  Four tickets was a JACKPOT! I took a friend and Bug took a friend. We sat in the front row of the balcony.  That does not sound like much, but this is the ACL Moody Theatre. The balcony is at eye level with the stage and sits just above the heads of those poor suckers on the floor. We were looking eye to eye with the band. And the show was phenomenal! 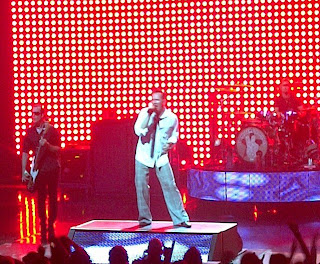 Then I won a pair of tickets to see Night Ranger, Foreigner & Journey at the Frank Erwin Center in Austin, Texas.  I went to this show not expecting very much.  I invited a friend from high school to join me after the Bug said she was not interested in seeing this show.

We arrived late and missed Night Ranger altogether. Foreigner had just taken the stage and before I realized it, I was entranced. Color me pleasantly surprised. They put on a hell of a show! Journey eventually took the stage but paled in comparison.  Foreigner had provided all of the night's entertainment that was to come.  We left about four songs in to Journey's set. 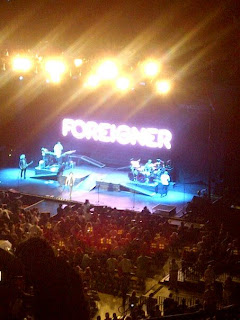 Van Halen announced their reunion tour with Diamond David Lee Roth.  I asked Bug if she wanted to go....her answer was YES!!!!  I checked out the tickets and they cost as much as two months worth of braces.  Considering I just paid the orthodontist off in December, I really didn't have much of a problem with buying these tickets. The seats are decent, not spectacular... and I do believe these are historically the most expensive concert tickets I have ever purchased.  The hotel reservation has been made... and now we shall await the month of June.

The next concert on tap for 2012 is Def Leppard/Poison/Lita Ford. Personally, I am a bit shocked that Lita still has a voice to perform with.  I really figured she would sound like a 75 year old lifelong smoker by now... but it turns out the old girl has held up pretty well. I am really looking forward to seeing her.  Our seats are outstanding!  We shall be drinking in this show from the fifth row!

The third (and as of this moment, final) concert of 2012 will be the most magnificent for the Bug. It is her favorite band on the planet. A band few Americans know.  They are a symphonic metal band out of Finland called Nightwish.  I found some VIP tickets along with Meet & Greet passes.  This is one time I will ask the Bug to pitch in toward her concert expenses. Normally I foot the bill and am totally happy to do so.  But the VIP tix with M&G's were priced steep.  So she kicked in $100 and then she screamed....because she is going to meet her number one favorite band of all time. She is going to meet Marco face to face.  She is going to (hopefully) touch his beard.

This is the stuff dreams are made of.
Performance by Rockstar Mom at 1:52 PM No comments:

Rockstar Mom
ROCK & ROLL ALL NIGHT AND PARTY EVERYDAY!! But first I've got to finish the laundry, drop the Bug off at school, put in 8 hours at the office and fix dinner.